From the 14th to 15th September 2015, UNESCO representatives, worldwide researchers, academics, science historians and political decision makers gathered in Paris to explore UNESCO’s International Year of Light by visiting the progression along with contributions of studies in light from the Islamic Golden Age and beyond

One scholar in particular, Ibn Al-Haytham is distinguished for having highlighted the importance of celebrating and promoting all histories of all peoples as he has been heralded by many historians as “the father of optics”. In her opening address, the UNESCO Director General, Irina Bokova expanded on this point further, declaring that: Abū ‘Alī Al-Hassan Ibn al-Haytham, commonly referred to as Ibn Al-Haytham was an 11th Century Arab polymath scientist, who was born in Iraq and lived and died in Egypt.

Although he is most renowned for his contributions to the principles of optics, he also made significant contributions to, mathematics, astronomy, engineering, and also wrote on medicine and philosophy amongst others.  Perhaps his most important contribution was in laying the foundations of the scientific method. Ibn al-Haytham should also be credited for his objectivity and appreciation of contributions from different cultures and civilisations. He wrote, ‘truth is sought for its own sake’[2]. Similar sentiments were commonplace amongst scientists in Muslim civilisations such as polymaths such as Al-Mas’udi who is quoted to have penned, ‘I do not shun the truth from whatever source it comes.[2]’

It is in this spirit that speakers and participants presented and deliberated various discussions regarding Ibn Al-Haytham and other figures from Muslim civilisation and beyond regarding the potential of innovative light-based solutions to meet current sustainable development goals, notably in the field of energy..[1].

Amongst other academics, the Chair of the Foundation for Science, Technology and Civilisation (FSTC), Professor Mohamed El-Gomati OBE delivered a lecture entitled “Modern Electron Optics and the Search for More Light: The legacy of Ibn Al-Haytham”. Professor El-Gomati began his address by recognising the works of the French historian of science, Professor Roshdi Rashed, stating how “his contributions regarding the life and works of Ibn Al-Haytham far exceeded anybody else alive today who wrote on this subject.”

Professor El-Gomati then highlighted how recent development of white LEDs which mimic natural light have been solely credited to three Japanese Nobel Peace Prize winners, Isamu Akasaki, Hiroshi Amano and Shuji Nakamura. It was during the late 1980s and early 1990s that they invented the blue LED, which eventually led to the development of the white LED that is now available on the market. In this respect, it is important to note that their discovery and particularly later the efforts by many others  in having developed reliable and repeatable methods to grow the needed materials for such inventions (based on gallium nitride, GaN) depended largely on using high resolution electron microscopy.

Professor El-Gomati’s presentation then continued to address how through the eyes of the present day scientist, the role that historians of science might address , which would acknowledge the variety of contributions made by early scientists, particularly in the medieval period. He also explored the importance of dedicated and specialised learned journals on the subject, with rigorously researched material for the benefit and assistance of educators.

A more judicious and balanced historical view of the contributions of earlier civilisations, as perhaps depicted the figure below needs to be promoted: 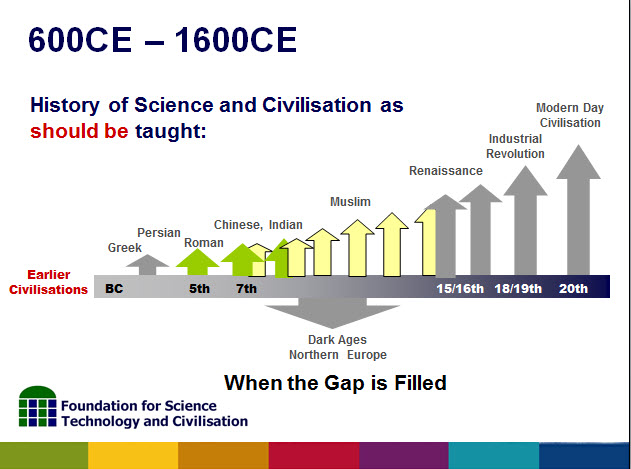 UNESCO.org: From the Islamic Golden Age to the Age of Photonics

FSTC.org.uk: Muslim Heritage also celebrates the IYL2015 with ‘1001 Inventions and the World of Ibn Al Haytham‘

About International Year of Light (IYL 2015)

The International Year of Light and Light-Based Technologies (IYL 2015) is a global initiative adopted by the United Nations (A/RES/68/221) to raise awareness of how optical technologies promote sustainable development and provide solutions to worldwide challenges in energy, education, agriculture, communications and health.

With UNESCO as lead agency, IYL 2015 programs will promote improved public and political understanding of the central role of light in the modern world while also celebrating noteworthy anniversaries in 2015—from the first studies of optics 1,000 years ago to discoveries in optical communications that power the Internet today. The IYL Global Secretariat is located at the Abdus Salam International Centre of Theoretical Physics (ICTP).

Further information can be found at  www.light2015.org 1001 Inventions is an award-winning, British based organisation that creates international educational campaigns and engaging transmedia productions aiming to raise awareness of the contributions to science, technology and culture from the Golden Age of Muslim Civilisation.

For one thousand years from the 7th century onwards, inspirational men and women, of different faiths and cultures, built upon knowledge of ancient civilisations, making discoveries that have had a huge and often underappreciated impact on our world. In an area that spread from Spain to China, this Golden Age of Muslim Civilisation saw fascinating advancements in science and technology that helped pave the way for the European Renaissance.

Over the last decade, 1001 Inventions has engaged with over 150 million people across the globe, with educational campaigns in cities such as in London, Istanbul, New York,Washington DC, Los Angeles, Kuala Lumpur, Abu Dhabi and Jeddah.

1001 Inventions works with a network of international partners and leading academics, and through its academic partner FSTC (UK), to produce world-class experiences,interactive exhibits, feature films, live shows, books and classroom learning materials that are being used by hundreds of thousands of educators around the world.

Further information can be found at www.1001inventions.com

[1] UNESCO.org: From the Islamic Golden Age to the Age of Photonics